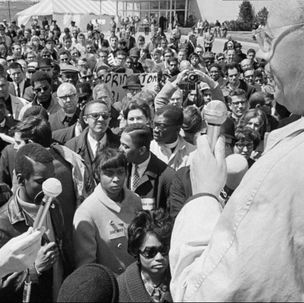 A protest at Kodak's annual shareholder meeting in 1967.
Unshared: A Failed History of Corporate Social Responsibility
Call it conscious capitalism. Or shared value. Or corporate social responsibility. Many consumers, regulators, and managerial thought leaders expect big business executives to act like good, responsible citizens and steer their firms accordingly—maybe more now than ever before. Executives at Nike, for example, are happy to celebrate their programs for young women’s empowerment in the developing world or support Colin Kaepernick’s protest against police violence. Executives at Whole Foods tout their firm’s support for a “virtuous circle entwining the food chain, human beings and Mother Earth.” So far so good. But when it comes to pressing issues that demand structural change like economic inequality, climate change, the erosion of privacy, and big tech monopolies, liberal values of equality and accountability break against the flood walls of corporate capitalism. When it comes to the way big business actually does business, fleeting expectations and Aquarian rhetoric have outpaced prospects for real change. In this case, “don’t be evil” isn’t just an abandoned slogan. It is a diversion from difficult questions about power.
A clue to our predicament lies in the corporate form itself. By virtue of state charters and Wall Street regulations, corporations enjoy immense legal privileges and operate according to specific rules of governance. It is not without justification that some have called corporations “private governments.” They are concessions of power; fiefdoms of administration. That’s why promises of benevolence or signals of progressive values barely scratch the surface of what is at stake: namely, who gets to make decisions and how. Unshared is a history of the development of corporate power and the politics surrounding the governance of large business institutions from the end of the 19th century to the present day. This book tells the story of how financial investors and professional managers have for decades fought a proxy war over the governance—and, more obliquely, the purpose—of the large corporation. But it also includes an unlikely cast of characters, from civil rights activists and public interest agitators to regulatory policymakers and liberal intellectuals, showing along the way that the political history of the corporation can only rightly be understood through the stories of all those who those who work for, buy from, and live under the social reality of corporate capitalism. Unshared argues that the history of corporate social responsibility is primarily a failure to integrate the checks and balances that we expect in other areas of our democracy. Against the dominant financial interests of investors and in contrast to the powerful assertions of managers and executives, there persists a vital and unresolved political tradition of corporate democracy going back to the social movements of the 1960s and 1970s to New Deal liberals of the 1930s and to progressive reformers of the early 20th century that continues to shape the expectations we have for the most powerful institutions in modern life.

Standard Oil refinery in southeast Kansas circa 1904.
​Roosevelt's Populism: The Kansas Oil War of 1905 and the Making of Corporate Capitalism
Journal of the Gilded Age and Progressive Era Vol. 19, Issue 1 (January 2020).
The map of the American petroleum industry shifted rapidly from the Northeast to the Southwest at the turn of the twentieth century when spectacular gushers were struck first in Texas and soon in California, Kansas, and Oklahoma. The flood of small and mid-size oil producers broke the hold that the Standard Oil Company had for decades held on the industry. Competition defeated monopoly. Or so the conventional story goes. This article offers a more complicated narrative by focusing on conflicts between Standard Oil and independent producers in the booming towns of southeast Kansas in 1904 and 1905. In those years, John D. Rockefeller's firm established a monopoly through technologies of distribution and distillation and the production of scientific knowledge and opaque classifications of commodities. Oil producers revolted. A reform movement turned to the rhetoric and policy ideas of Populism as it sought to use state power to challenge the stranglehold of the “octopus.” This article explores the previously unrecognized significance of this movement by showing how the Kansas oil war contributed to the breakup of Standard Oil by the Supreme Court in 1911 and constituted one of the bottom-up sources for the reconstruction of American capitalism.

Ralph Nader, one of the organizers of the Campaign to Make General Motors Responsible, speaks at the University of Michigan in 1970.
We Cannot Trust the Corporate Bureaucracy: The Ironic Politics of Business Accountability in the Post-War United States
“There is no such thing as a corporate responsibility,” Henry Manne told a Senate committee in 1976. Business executives and directors, he argued, had no right to control large corporations for any political or social interest. A legal scholar and conservative activist, Manne disseminated a radical brand of law and economics ideas to law professors and federal jurists through educational programs at luxury resorts between the 1970s and 1990s. Manne was not alone—but not in ways that he expected. His greatest enemies of the late 1960s and 1970s were leftist and liberals like Saul Alinsky and Ralph Nader who wanted to make large corporations accountable to the interests of social movements. Black power, environmental, consumer protection, and feminist activists believed that business leaders needed more accountability. A transformation of corporate governance, they said, was necessary to replace the unaccountable, if liberal, manager. Manne represented a long-brewing right-wing perspective on political economy. Left-liberal activists had suddenly burst onto the scene. Both had something in common with a third group. An emergent cohort of managers and financial consultants had come to believe in the 1960s and 1970s that the older model of the long-term growth and conglomerated-industrialism had become obsolete. All three groups helped to delegitimize the decades-long regime of liberal managerialism that had emerged in the years immediately following World War II. Building onarchival research and on other histories of capitalism, my paper presents an interpretive problem. The late 1960s and 1970s represented the greatest challenge to the power of corporate capitalism since the New Deal. But this era of protest was followed by the rising power of Wall Street. This academic article gives attention to how an unlikely combination of financial managers and consultants and right-wing and left-wing activists contributed to the new age of shareholder value.

James Weinstein. The Corporate Ideal in the Liberal State, 1900-1918. Boston, MA: Beacon Press, 1968.
James Weinstein and the Neglected Importance of the Concept of Corporate Liberalism
By the time James Weinstein wrote The Corporate Ideal in the Liberal State, the concept of corporate liberalism had been around for a while. In a speech at a march on Washington in 1965, Students for a Democratic Society president Carl Oglesby identified corporate liberalism as the root cause behind American imperialism and the war in Vietnam. The term itself came from the master’s thesis of Martin J. Sklar, part of which he adapted into an essay for publication in Studies on the Left in the fall of 1960. The progressive and corporate origins of American empire had been noted before, particularly in The Tragedy of American Diplomacy, published a year earlier by William Appleman Williams, a professor at the University of Wisconsin-Madison whose early influence over Weinstein, Sklar, and the New Left was considerable. It was Weinstein’s 1968 book that provided the most compelling and consequential treatment of corporate liberalism up to that point. Five decades on, The Corporate Ideal is long since out of print and, where it does remain on the shelf, sits largely unread. The concept of corporate liberalism, meanwhile, has disappeared under the tide of ascendant theories of neoliberalism. The loss is considerable. But the concept itself and Weinstein’s book still stand as a fresh and indispensable source for historians and intellectuals who wish to understand the intertwined history of corporate capitalism and American political ideas—maybe more now than ever before.